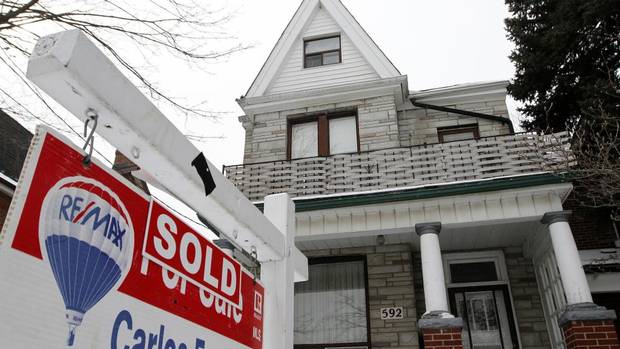 Toronto has joined the $1-million club.

The average cost of a detached home topped that mark in Feburary, hitting $1,040,018, the Toronto Real Estate Board said Wednesday.

That marked the first time above $1-million, and an increase of almost 9 per cent from a year earlier, and came as the group reported another surge in both sales and prices last month.

The number of active listings tumbled by 8.7 per cent, which means that “market conditions became tighter, leading to more competition between buyers,” the group said.

“Even with the record low temperatures last month, we still saw an increase in the number of people purchasing homes in the GTA,” said TREB president Paul Etherington.”

Fortunes are changing across Canada amid the oil slump.

In Calgary, for example, home sales plunged 34 per cent in February from a year earlier.

The tally for January and February in Calgary puts sales “just a shade above the level of activity seen in the same period during the financial crisis in 2009,” said senior economist Robert Kavcic of BMO Nesbitt Burns.

“While growth in new listings has cooled to 9 per cent year over year, the months’ supply continued to rise to a 3 1/2-year high,” he added.

“That has pulled the average transaction price down 4.2 per cent in the past year, partly reflecting the fact that $1-million-plus sales have cratered at twice the rate of sub-$1-million properties.”

From – http://www.theglobeandmail.com/report-on-business/economy/housing/million-dollar-club-average-cost-of-a-detached-toronto-home-tops-1-million/article23278494/
Price gap between condos and new houses in Toronto soars »