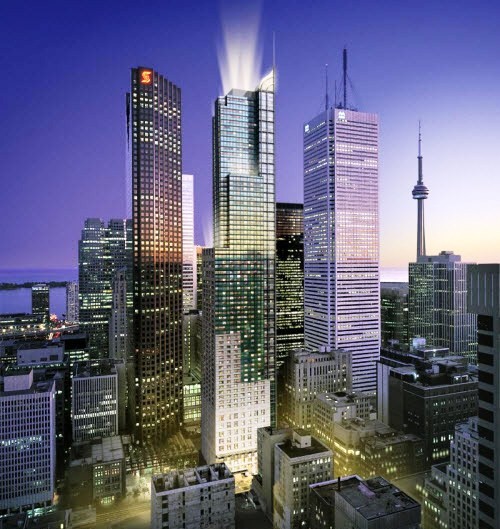 Canada’s reputation as a safe country to live and bank is luring buyers from abroad and driving the housing boom in Toronto.

The city of 2.8 million attracts about a quarter of the 250,000 immigrants who arrive in the nation each year. That’s helping drive demand for new housing, including condos and rental properties, property Developer Sam Mizrahi, said at the Bloomberg Economic Series Canada summit in Toronto, “Immigration keeps the market buoyant,” said Mizrahi, president of Mizrahi Developments. “Canada’s seen as the new Switzerland.”

Developers in Toronto are building 97 residential towers — some as high as 92 stories — more than any other city in North America including New York City, according to data compiled by Emporis GmbH. The developers, and the city’s chief planner expect condominium construction to continue as employees flock downtown for jobs, restaurants and entertainment.

The city is a target for local and international doomsayers. Fitch Ratings Inc. said housing prices in the province of Ontario are 25 percent overvalued and condo market prices may decline as much as 10 percent.

“Every year there’s doom and gloom about how there’s about to be a bust,” said city planner Jennifer Keesmaat. “We do not have a market based on speculation. We don’t have empty buildings.”

Keesmaat is responsible for planning the city and overseeing the review of at least 3,000 development applications the city receives each year.

Canada’s political and economic stability have strengthened housing demand from overseas investors, said Mizrahi. The country’s banks have been ranked the world’s soundest for seven consecutive years by the Geneva-based World Economic Forum.

Investors, those with at least one secondary unit, make up about 16 percent of Toronto and Vancouver condo buyers and 10 percent hold more than three units, according to a survey from Canada Mortgage & Housing Corp. CMHC’s survey, released Friday, doesn’t track foreign investment.

Smart House, a micro-condo project being developed by Urban Capital in downtown Toronto, is comprised of 75 percent investors, according to co-founder David Wex. The ratio of investors varies greatly depending on location and rental demand, Wex said.

U.S. developers “think it’s insane what’s going on in Toronto,” Wex said. “People do not realize how sophisticated and world-known our market is.”

Canada’s gross domestic product may expand by 2 percent this year and could accelerate to 2.5 percent next year, trailing the U.S., Royal Bank of Canada Chief Executive Officer David McKay said earlier at the Bloomberg conference.

The supply of high-rise homes may not be meeting demand, with number of unsold units under construction dropping 9 percent to 7,059 units in the first quarter, according to Urbanation Inc. Prices rose 2 percent to $562 a square foot in the same period from the year ago, the data provider said.

Almost half of Torontonians were born outside Canada, making it one of the most diverse cities in the world, according to the municipality’s website. Chinese speakers are the most numerous among recent immigrants, followed by Italian, Punjabi and Tagalog speakers.

Municipal leaders need to ensure the city remains an attractive place to live amid the building boom, with public spaces and efficient public transit, said Keesmaat.

“If the city isn’t livable, people move away,” she said.