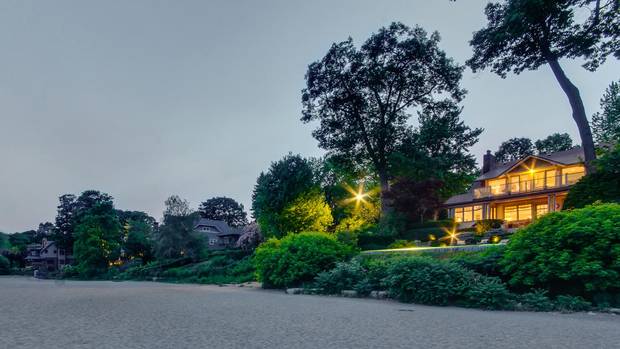 Canada Day festivities apparently did little to divert the laser focus of house hunters in Toronto.

On Friday, 434 Lake Front in Toronto was featured as Globe Real Estate’s“home of the week” just after it hit the market with an asking price of $5.23-million.

On the weekend a bully stepped in and offered $5.7-million for the house on the edge of Lake Ontario at the east end of the Beaches boardwalk.

Ms. Wright says a lot of people had already been through the house after the agents held a soirée and invited owners of houses on nearby streets.

“For the few days that we were on the market, we had a lot of traffic,” she said.

The Toronto Real Estate Board said this week that high-end houses have accounted for a greater share of overall transactions this year than last, pushing up the average selling price.

TREB reported that the average selling price surged 12.3 per cent in the Greater Toronto Area in June compared with the same period last year. Sales jumped 18.4 per cent last month compared with June, 2014.

The house at Lake Front and Munro Park Avenue is one of only 14 that sit along that stretch of sand, facing the lake. Prospective buyers may also have been intrigued by the connection to the wildly popular Degrassi franchise. Ms. Schuyler and Mr. Stohn are executive producers of the long-running television series.

So called pre-emptive offers became increasingly popular this spring as frustrated buyers grew bolder. The strategy involves dangling a cheque for an eye-popping amount in front of the homeowners before the scheduled offer date with the hope of beating rival bidders to the table.

Typically, the prospective buyer makes the offer valid for a short time and adopts a take-it-or-leave-it stance. Because of such pressure tactics, the bidders are labelled as bullies.

It’s up to sellers whether they will welcome bullies or spurn them. Some homeowners refuse to deal with them. They’d prefer to see how high the bidding can go on offer night.

“It was something our sellers were willing to entertain,” Ms. Wright says.

Following protocol, Ms. Wright let the other visiting agents know that a bully had appeared. That drew a second offer but it was far below the triumphant bid, she says.

Mark Savel, an agent with Sage Real Estate, spent part of Canada Day negotiating the sale of a condo he had listed at the Festival Tower at 80 John St. in Toronto.

The sale was firm before the fireworks.

“We did it from ribfest. On an iPad.”

The two-bedroom unit with a southwest view was on the market for about 15 days. The buyer had been looking at it pretty much from the first day but didn’t make an offer until July 1. Still, Mr. Savel thinks that launching a bid on the holiday was just a coincidence – not a ruse to avoid competition.

“I don’t think there was any strategy behind it,” Mr. Savel says.

Brokerages that receive bids on a property must keep details of the offers in writing. The regulations are partly meant to give consumers more insight into bidding contests and to deter so-called phantom offers.

Mr. Savel says he did tell the agent representing the buyer at Festival Tower that another agent had expressed interest, “which means absolutely nothing.” Under the new rules, he would not be allowed to say he had another offer unless it was in writing.

Mr. Savel became one of the first to fill out the Ontario Real Estate Association’s new standard form 801, which provides a summary of the offer details.

The agent says he’s in favour of the new rules.

“I think that form 801 definitely levels the playing field. It just adds another level of transparency.”

As for the coming weeks, Mr. Savel thinks the blistering pace of Toronto’s real-estate market will slow.

He’s advising sellers who haven’t listed yet to wait until after the Pan Am Games. He knows a lot of colleagues and competitors doing the same.

“A lot of realtors are taking a vacation for those two weeks.”