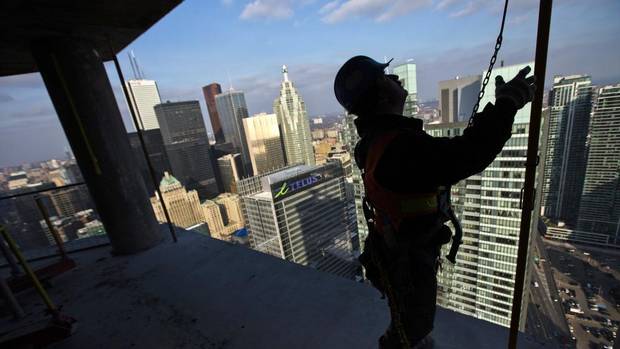 After years of slow growth, Toronto’s condo market has come roaring back to life.

Builders were putting the finishing touches on nearly 10,400 new condo units in January, eight times more than the monthly average over the past decade, Bank of Montreal senior economist Sal Guatieri said in a report last week.

The vast majority of the new condo units have already been sold. Still, the influx of new units has helped push the number of unabsorbed condos – those that have been built but not sold – to a 21-year high.

It is a dramatic rise for a city whose condo market has been at the centre of concerns among federal regulators and international organizations such as Deutsche Bank about rising levels of household debt in Canada.

The latest wave of Toronto condo completions and sales could mark a new upswing after a lull in the market. Sales hit a four-and-a-half year low last fall, while new condo completions had been falling for the past 18 months.

Much of the new supply is the echo of a building boom that began in early 2012, when developers started construction in more than 37,000 new condo units in the city, well above the long-term average of 25,000 units a year.

But the January condo boom also reflects the fact that banks and other lenders are returning to the market, now convinced the city’s condo sector isn’t poised for collapse.

Under pressure in the past from federal regulators, such as former Bank of Canada governor Mark Carney and former finance minister Jim Flaherty, lenders had largely retreated from Toronto’s condo market, working only with well-known developers and often requiring a high number of presales before they would agree to finance construction.

But officials in Ottawa have grown quiet and banks are now eager to fill holes in their loan portfolios, several lenders told a commercial real estate conference last week.

“It’s a very competitive market out there,” Frank Margani, executive vice-president of strategy and development at Fortress Real Developments, told the RealCapital forum. “Portfolios are down and everybody is scrambling to get their piece of the action.’”

Lenders are now willing to finance as much as 75 per cent of the value of a project, up from 70 per cent in recent years, said Chris Milne, vice-president of real estate banking at the Bank of Nova Scotia.

Some have also eased up on their presale requirements, typically asking that developers have buyers for at least 65 per cent of their units, confident that builders will eventually find buyers for unsold units.

« If GTA housing unravels, how it might unfold…
In Toronto, home buyers find price counts – but speed counts more »